“Airport Built, It’s Time to See if the Traffic Comes” 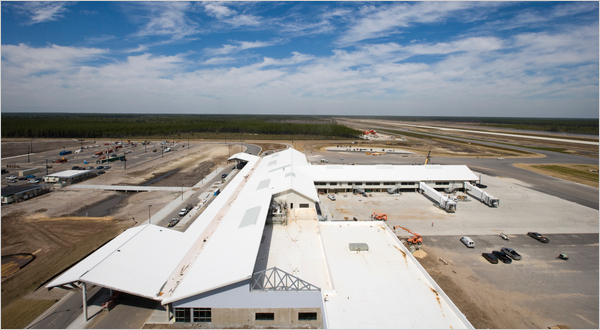 The Northwest Florida Beaches International Airport in Panama City, planned when the economy was better, is scheduled to open May 23. Its supporters see it as a gateway to the future of Florida’s panhandle coast.

The first new international airport in the United States in more than decade is set to open in May near Panama City, Fla., a community of 37,000 people on the state’s panhandle. That is no small feat given the environmental, regulatory and financial hurdles involved in building runways and terminals, as well as community opposition to planes flying overhead.

But the airport, Northwest Florida Beaches International, is also noteworthy because it is perhaps more of a real estate project than an effort to address a pressing transportation problem. Backed by a major Florida landowner, it is part of a plan to create “a new national and international destination,” as one investor presentation proclaims, in a relatively sleepy region of beaches, barrier islands and wetlands.

“Silicon Valley at one point was out in the middle of nowhere,” said Britt Greene, president and chief executive of the St. Joe Company, the Florida developer that donated the land for the new airport and is the driving force behind the project. “We think we can do the same.”

St. Joe, once primarily a timber and paper company, has shifted to development and real estate, and owns hundreds of thousands of…
>>>continue reading<<<